I had a great day out at St Pierre on Thursday 4 July 2013 playing in the William Hunt Trilby Tour for the third time. The first two times I played at Trevose, scoring 28 & then 32 points (off 8, with 3/4 handicap so given 6 shots). Nice progression in the my game. My home course is Henbury in Bristol which although a fair bit shorter than St. Pierre (6,103 yards, par 69) is, I think, a whole lot tighter in terms of tree lined fairways and real rough/bushes in which you can easily lose a ball with loose shots.

After six holes I realised I was striking the ball pretty well, scrambling pretty well and putting like a pro. 12 points in the bag and the drizzle was not putting me off. At this point I gave my scorecard to my caddie and let him to the rest of it.

After 9 holes as I walked of the green past the scorers, I just jabbed my thumb at my caddie and said “He’s got my card!”. Not even a glance at the board, but in my head I was pretty sure that 18 points was a pretty good front nine and would probably get my name up there (only the third group out remember!!!).

At 11:45 I walked off the course with 33 points, just one blob on the 11th. A terrific drive to the right centre of the fairway, a rubbish pushed 7 iron to miss the green short & right, a duffer chip into the bunker, out of the bunker a chip and two putts for a six. 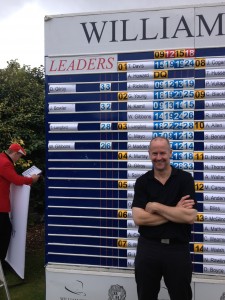 Picture to the right of me and the leaderboard! What that meant was a REALLY long wait to find out if I would make the three hole playoff at the end of the day. The wait got longer, and longer, and longer. But, at 7pm, it was clear that I MIGHT in the playoff. In fact there were five of us, so we had to have a nearest the pin on the 18th hole (shortened tee from 134 yards).

I could write a whole separate post about how long it took to whittle five players down to four. I think the last two to “play off” needed to hit six shots each and by then it was “nearest the pin whether on the green or not” as we were losing the light rapidly.

I got through in the first round of shots, and then there were four. So, it was off to the 16th hole (where the photo below was taken). My caddie for the full round had been Paul Mitchell from Bristol & Clifton Golf Club who has been my teacher for the seven years since I took up the game. For the playoff I had a junior from St Pierre called Callum who kindly agreed to carry my bag. The scorer (shown in the photo below) is Mark Wood one of the Professional staff at St Pierre, but those of you reading this who are Henbury members will remember him from our club. 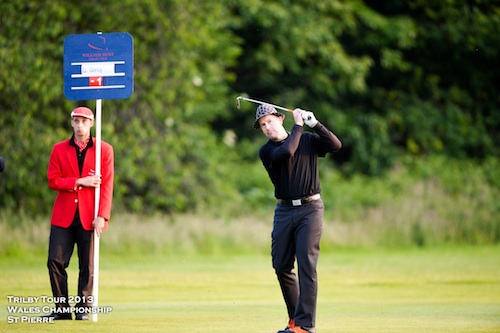 After two playoff holes I’m at level par and leading by one shot. On the 18th I hit a great 3-rescue but got a slightly unlucky bounce into the back of the bunker right of the green, left a bunker shot in the bunker, just got it out, chipped and two putted for a six and lost by one shot!

However, having come in the top ten I qualified for the Grand Final on 28 August at Rockliffe Hall in Co. Durham. Can’t wait for that.

If you want to play in an “anyone can enter” amateur event that feels as much like a pro tour event would feel, the Trilby Tour is the one to enter.