The Ailsa Course at Turnberry 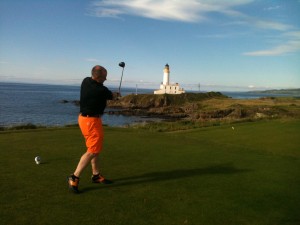 What a fantastic day out yesterday on The Ailsa Course at Turnberry Resort. A twilight rate of £95, teeing off at 4pm with MrsG. We were paired with two other guys, but after two great drives, two greens in regulation and two two putts from yours truly, they politely asked us to “go on” and leave them to their game…it was quite funny!

We treated ourselves to two caddies (£40 cash in hand + tip). MrsG had Martin who it turns out works on the greenkeeping staff and I had Bill. Turns out after three holes that I worked out that Bill was the same caddie I had when we played the course last summer.

Anyway, back to the golf. I shot 11 over (playing off an 8 handicap) with a couple of double bogeys. The biggest problem? The fairway bunkers. They are JUST in the right place for my driving distance, I ended up in four of them, so there’s four shots lost right there.

Right from the greeting by the Starter to when he puts a course planner in your hand, you know you’re in for a treat. That said, the course planner is flipping complicated. There are more lines on the greens than on a game of noughts and crosses!!

The course was in magnificent condition. The Senior Open was there just two weeks before. Green is not the word for the course, I’ve never seen the fairways look so green, and the greens were the same. Still running very true but a tad on the fluffy side. 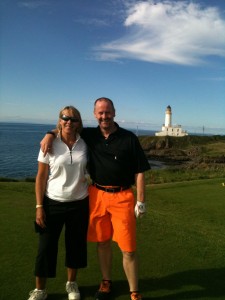 My only real birdie chance was the par 5 17th.  A good drive to the left hand short rough, a 3 wood to 20 yards short of the green taking out the two bunkers short and right left a chip & a putt.  The chip was great, to around 5ft, but a slight misread on the putt saw it slide by the left side by just an inch or so.  VERY fustrating.

If you’ve never played the course I’d seriously encourage you to make your way to the West Coast of Scotland at this time of year. If you rock up for a week there’s a REALLY good chance you’ll find a calm, sunny afternoon where you can go and play The Ailsa. We managed to book the day before, so often there is not too much pressure on tee times.

After the golf it was in to the clubhouse for a chilled glass of wine before trekking back up to Troon (our base for the week) via the Taj Tandoori, a great indian restaurant in Prestwick.  They have buffet nights on Tues, Thurs & Sun.