Nike Matchplay practice round. Have I peaked too early?

Today my friend Mark Taylor and I went to Bristol & Clifton Golf Club for a practice round ahead of the regional final of the NikeGolf Matchplay Championship.

We’ve already won our way through four matchplay rounds and now it’s a betterball regional final.  The top two from 12 pairs go through to an all expenses paid trip to Vale de Lobo in Portugal.  Now that is some kind of incentive in my book.

So, Mark and I thought we’d better get organised and have a practice round.  It is a golf course that we’ve both played a few times before, but it was still worth making sure we played it close to the event.

Now, I’ve been playing pretty average golf for most of the year and have not really been playing that much in the last few weeks so was not expecting too much from my round today.  So where the hell a one over par, 71 came from I have NO IDEA!  My driving was fantastic, only missed three fairways all day and even when I missed them, it was into the first cut and did not cause any problems.  My short game was sharp with only a couple of exceptions and could easily have shot level par or even one under.

So, have I peaked to early before Thursday or what?? 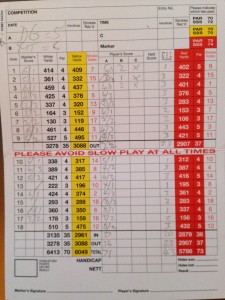