My day out at the William Hunt Trilby Tour at Trevose

Yesterday was my second time playing on the William Hunt Trilby Tour at Trevose and I have to say, it was just as much fun as last year.

As a reasonable 8 handicap player, it’s about as close to what I imagine a proper Tour event might be like. Look, they even have a great big scoreboard!

I chose to stay over the night before and travelled down with my Caddie in the late afternoon. The closer we got to Trevose the better the weather became and by the time we pulled up in the car park we were in bright sunshine. This did not bode well for the next day unless you believe the “red sky at night” theory. That said, the forecast wasn’t “that” bad for Thursday, cloudy all day with some chance of rain.

So, we jumped out of the car, I changed into my “Trilby gear”….yes, I brought my own hat and jumped onto the first tee. A few limbering up swings with a 6 iron, down with the tee, ball on top, out with the driver, into my pre-shot routine and bang. Surprisingly the ball went straight down the middle, a hint of draw (helped by the right to left breeze, well barely a breeze) and we were away. If only I could feel that relaxed when my 8am tee time arrived the next day.That reminds me, what the hell did I do wrong to get given an 8am tee time William?

We played the 1st, 2nd & 3rd, drove off the 4th and then played back in on the 7th, 8th & 9th. Last year I played a whole practice round by myself (Caddie came down the next morning) and had a ‘mare and it really affected me in my real round. Top tip, never play a full practice round, most Pros don’t. The only exception I guess would be if you’d never played a full round on the course you were playing.

The first challenge that evening was where to eat. I forgot to book a table in the clubhouse restaurant so it was down the road to The Cornish Arms part of the Rick Stein empire in and around Padstow. Excellent food and a couple of small glasses of wine as a “loosener”.

The next challenge was setting an alarm. My phone battery had died, no alarm clock provided in the Trevose Flat we were staying in. So it was my Caddie’s phone and one on my computer as backup.

6am came round pretty soon and ten minutes later I leapt out of bed, straight in to the shower to start to warm up my 49 year old bones. Got dressed in my Trilby Tour gear and it was off to breakfast.

The Trilby Tour does a pretty mean 1st tee I can tell you. Loads of banners in a u-shape behind and to the sides. A Sky Sports cameraman off to the right, the Starter up in an umpire’s chair and at least 20 or 30 people all around the tee, even at 8am in the morning.

Down with my tee, ball on top, you heard it earlier. Way more nerves than yesterday, but I remembered to “stay back on my right side” (something my teacher @PaulMitchGolf and I have been working on), keep my head down and swing hard. Straight down the middle to a rewarding ripple of applause.

Oh, I forget to mention earlier that my Caddies was my teacher, Paul Mitchell from Bristol & Clifton Golf Club. If you are in the Bristol area and want an excellent, excellent teacher, Paul is your man. I’ve been with him for the whole six years I’ve been playing golf and learn something EVERY time I go and see him.

I won’t bore you with a description of every hole! A quick summary. 19 points on the front nine. Bogeyed the 3rd, birdie on the 4th and a double on the 7th. Two over. 26 points after after 12 holes and even without doing my own scorecard I was doing well. But that was it for good scoring. I scored all the way in, but bogeyed all six closing holes from 13 to 18 resulting in a disappointing 33 points. It could have been so much better. But, having Paul by my side was great and the diagnosis on the way home was very useful. 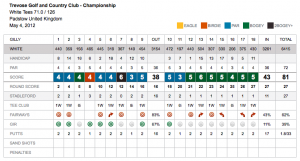 As we were the fourth group, for some while over lunchtime I even featured on the scoreboard. However as soon as their were two scores in at 37 and a 35 I realised that the top four was never going to happen and a top ten would be unlikely. So, it was into the car and off home we went. Roll on 2013 and well done to William and his whole team for another great event.